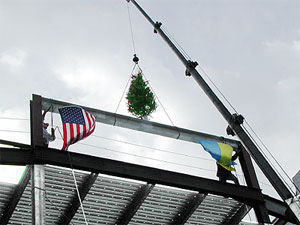 Ever since I was a kid, I remember seeing and reading about Christmas trees on top of buildings under construction but they were not quite finished. I also remember seeing an American flag and there was usually a ceremony of some kind that was covered in the newspapers.

There has been a tremendous amount of construction in recent years and I started thinking about topping out [1] ceremonies:

What is this all about? Why a tree?, and Why was I looking up instead of watching where I was walking?

When or how it started, but the tradition of ‘Topping Out’ has become a cherished custom of Ironworkers whenever the skeleton of a bridge or building is completed. Topping Out is a signal that the uppermost steel member is going into place, that the structure has reached its height. As that final beam is hoisted, an evergreen tree or a flag or both are attached to it as it ascends. 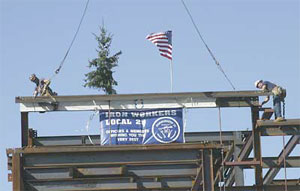 This tradition of ironworkers [3] is most closely associated with the International Association of Bridge, Structural, and Ornamental Ironworkers [4] union in Washington, DC.

“Topping out” is the term used by ironworkers to indicate that the final piece of steel is being hoisted into place on a building, bridge, or other large structure. [5]

The project is not completed, but it has reached its maximum height. To commemorate this first milestone the final piece of iron is usually hoisted into place with a small evergreen tree (called a Christmas tree in the trade) and an American flag attached. The piece is usually painted white and signed by the ironworkers and visiting dignitaries (figure 1). If the project is important enough (and the largesse of the contractor great enough) the ceremony may culminate in a celebration known as a “topping out party” in which the construction crews are treated to food and drink.

For those who are into Scandavian mythology here is the History of the “Topping Out” Ceremony [Columbia University] [6] via The Ironworker [7] magazine. 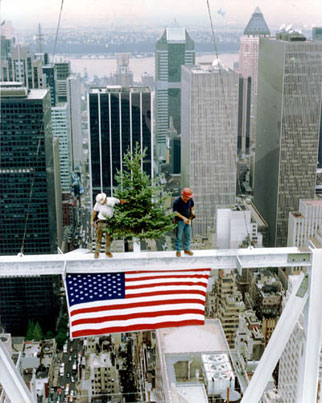 Mohawk Indians [8] are the most well-known ironworkers and are close associated with topping out buildings.

Here’s a sampling of local coverage for a typical event:

Topping Out at 7 World Trade Center [12]
Topping Out At The Ukrainian Museum’s Top Project [13]
Topping Out the Blanton: That tree on the roof? Means the new museum is A-OK. [14]
Vought-Alenia plant to be topped out [15]

but its not limited to the US…